A Message from The Chairman 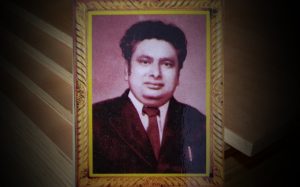 Born in 1944 at Subankar Chapra (Digh) a small village in the district of Siwan, got his early education in Gangpur, Sisawan and got the honorable degree of “SAHITTYA RATAN” from Assam.He started his career as a supervisor at Bhagalpur @ Rs. 15/- per month. Then he went to Tinsukia in Assam in the year 1964 and joined a saw mill “Chamari Brother’s at Naimaly, as a supervisor, But he was not satisfied with his job. So in 1967 he left his job and joined “Veneer Mills” as a timber manager. He worked there for five years in 1972 he again left that job and started his own business in Digboi (Assam) as Timber and Veneer Merchant.In 1978 he started a saw mill in ledo. After that in 1984 he started another industry at Dimapur in Nagaland. And he started to flourish in those sectors.

In the meanwhile the Ex Chief Minister of Bihar Late Bindheshwari Dubey Ji came to visit Assam and Nagaland and saw the magic touch of Mr. Ramnath Singh. And that is when he requested Mr. Braj Bhusan Singh to start a similar unit in Bihar too. Mr. Braj Bhusan Singh accepted his honorable request and started one more unit of plywood as “M/s Asian Plywood Industries (P) Ltd. At Hajipur Industrial Area, Bihar in the year 1988. It is one of the biggest plywood factories in Bihar with all the latest equipment. On 7th of September 1991 he took his last breath and left us in this Universe to look after his empire. He was very simple, gentle and kind to everybody. His services to this country in time of need would be remembered till the Sun is present. Now Er. Braj Bhusan Singh, the son of Late Mr. Ram Nath Singh is running his dream.

We the members of Asian Family wish Mr. Ram Nath Singh to have a peaceful time in heaven and give us “Blessing” to run his dream smoothly and carry it up to height of the Himalayas.